In Lieu of Flowers

Funeral of Moussa Arafat. In lieu of flowers, please bring weapons. He would have wanted it that way. 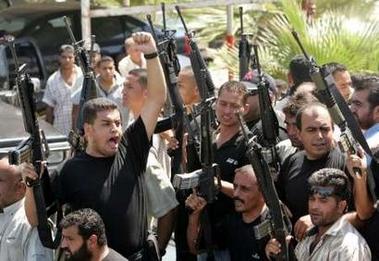 Palestinian gunmen brandish their weapons next to the coffin of Moussa Arafat during his funeral in Gaza City, September 9, 2005. Palestinian militants freed the son of slain ex-security chief Moussa Arafat after kidnapping him and shooting dead his father in a raid they called a reprisal for 'collaboration' with Israel. The killing had stirred doubt about whether Palestinian security forces can keep order in the Gaza Strip, seen as a proving ground for Palestinian statehood, once Israelis leave the occupied territory during a planned pullout next week. REUTERS/Ahmed Jadallah