Apparently, some of Hamas' leaders have finally revealed themselves on the "main Hamas website"**. And the IDF hit squads shouldn't have much trouble recognizing and locating some of these guys. Those masked heads look awfully familiar!. 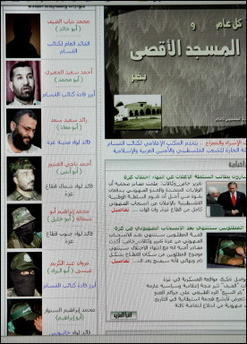 ** a website which I've so far not found but which is apparently readily available to AFP and Yahoo -- anyone know how to get there?