Monuments to the Unknown Militants

I'm a little surprised to see Arafat went to the effort of making a special "Statue of the Unknown Soldier", and that the Palestinians bother fixing it every time vandalism, riots or a little work accident damage it: 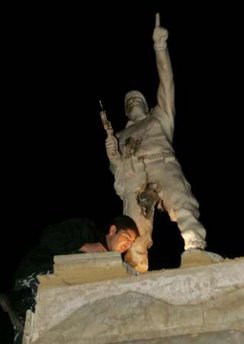 A Palestinian policeman inspects the damage on the statue of the Unknown soldier after unknown assailants blow up a part of the statue in Gaza December 6, 2005. Late Palestinian President Yasser Arafat ordered the building of the statue as a symbol of the Palestinian fight against Israel. REUTERS/Mohammed Salem

After all there are so many monuments to the unknown militant already lying around, including this fresh example: 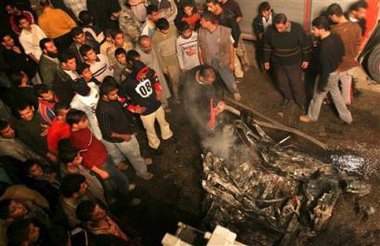 Palestinians gather around the remains of a car after it was hit in an Israeli missile strike in the Rafah refugee camp, southern Gaza Strip, Wednesday, Dec. 7, 2005. An Israeli aircraft fired a missile at a car carrying Palestinian militants on Wednesday, killing one militant and wounding 10 other people ,the first such attack since a Palestinian suicide bombing this week.The missile struck a white Subaru car shortly after nightfall in the southern town of Rafah, said Moaiya Hassanain, a Palestinian Health Ministry official who confirmed the casualties. (AP Photo/Khalil Hamra)

It looks like the monuments to the unknown militant get a lot more visitors, swarms of them in fact. I have a feeling there will be more.