I'm really almost done with the newswires photos. Just this last one, I think. I wouldn't even do this one except it falls so close on the heels of yesterday's Palestinian Boy photo. No, it's not another picture of another muscular man, labelled as a boy to render beyond the pale any criticism of his innocent stone-throwing. 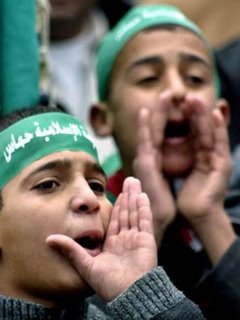 Hamas supporters attend a pre-election rally in village of Ellar near the West Bank town of Tulkarm on January 14, 2006. U.S. aid to the Palestinian Authority would be reviewed and possibly reduced if it gave Hamas a role in government after this month's Palestinian election, U.S. diplomatic sources said on Friday. REUTERS/Mustafa Abu Dayeh

With a tip of the hat to Israellycool, let's briefly review how the subjects of newswire photos are to be labeled.

If a Palestinian is engaged in conduct which is to be glossed over or excused, terms like "boy" or "youth" should be used in photos such as these: 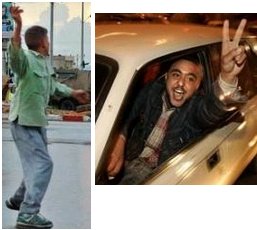 On the other hand, if the goal is to give the impression that a Palestinian of the younger persuasion is a full contributor to a noteworthy cause that is to be presented to the outside world as growing in significance, then it is important to enhance the pre-shaver's influence by using a word like "supporter". 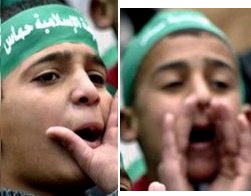 True, technically these supporters won't be able to vote for Hamas until they're old enough to remember whether the blue or the red wire is the important one. Nevertheless, the term is justified by the green headbands their parents forced them to wear, accompanied by stern parental admonishment not to touch or look at them since they only say Pokemon Rocks! Hey, they haven't taken them off, looks like support to me.

I guess this is what happens when your stringers (correspondents) have been stewing in the Palestinian cultural mixing pot. It takes a toll to cover so many Hamas press conferences, assiduously taking notes explaining that Israeli children are valid targets because they are either somehow responsible for their parents' selection of neighborhood, or because they are IDF supporters just waiting their eventual turn to man the checkpoints. It becomes a lot easier to see the kids as just pawns in the bigger game.

Note that I'm not blaming Reuters itself for writing this text -- that honor belongs to the correspondent. I do blame them, however, as an alleged "news" organization, for exercising no editorial control of the "news" that is sent out to the world in their name. Of course, if they would like to defend their journalistic credentials against these wild accusations from yet another obsessed blogger, that they are indeed exercising editorial control here, then I will happily publish a correction to this post and give them full blame.

Ok, that's it. I really do have some other topics coming up soon. If Reuters would only stop taunting me so.