The BBC is not unaware of the furor over cartoons of the prophet Muhammed published in a Danish newspaper:

Arab ministers have urged Denmark to punish a newspaper which printed cartoons that offended Muslims.

Ministers from 17 Arab countries criticised the 'offence to Islam' and called on the Danish government to ensure this would not happen again.

But while the BBC watches its competitors lose their heads (so to speak) -- re-publishing the cartoons willy-nilly in support of the Danes' right to free expression, or even just to allow their readers to see the blashphemy for themselves -- the BBC keeps an even keel. Rather than republishing the cartoons themselves -- an act which would be, if not illegal, at least in horribly bad taste and dangerous to boot -- the BBC simply describes them in terms that will hopefully convey to the reader just how cobustibly offensive these drawings are, without inflaming Islamic passions any further:

The newspaper published caricatures of the Prophet Muhammad, some of which depicted him as a terrorist.

Please understand that, in quoting the BBC, I don't mean to condone the public description of these or any other blasphemous cartoons or any other images which would offend or annoy Muslim sensibilities, either now or in the future.

I only quote it to call for further re-education of BBC staff. Apparently whatever sensitivity training has been carried out to date has been insufficient to stop them from describing blashphemous drawings. Sure, they'll try to hide behind the fact they didn't print the cartoons themselves, but that doesn't mean they had to go and actually describe the darned things, in general.

The BBC might also counter that they made every effort to balance any offense the description might have given Muslims by printing images offensive to others. For instance Danes and Christians will probably be quite miffed to see the Danish flag, with it's emblematic Christian cross, trampled on: 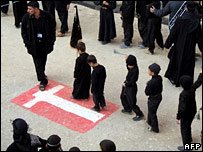 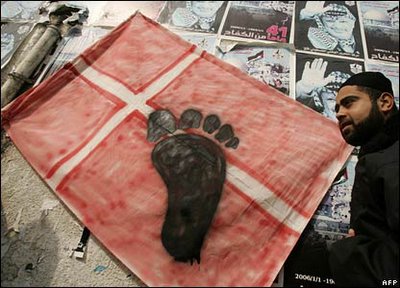 Hey, I acknowledge the BBC is making a good "faith" effort (figure of speech, I'm not saying the BBC has real faith, yet) to offend the world's non-Muslims, starting with Christians and Danes. I'm sure it was tempting to just describe to readers that Muslims, in certain places, are gleefully desecrating the cross of the Danish flag; however, the BBC wisely recognized that the more visceral, visual option would be more offensive. Well done. But it's not enough. Further training is needed to help the BBC understand that they have to work harder. Non-Muslims apparently don't share Islam's exquisitely refined volatility.

I could probably take care of the BBC's sensitivity re-training right here and now. It's pretty simple really:
Message to the BBC accounting department: you can mail me a check later -- don't worry, I'm sure you can get it subsidized by one of those rights-based NGOs, or failing that, the Saudi government would probably pony up if you asked.

I know I'm kind of hammering on this topic, this being my third or fourth "Danish Cartoons" post, but I believe this is an important issue, and usually a nail isn't driven home with a single blow.