The BBC reports that Britney Spears loves her baby and "would do anything to protect him," including this common safety maneuver: driving with the baby in her lap. 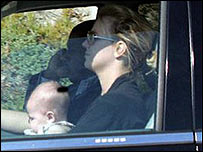 I know, I know, she has already whole-heartedly apologized:

"I made a mistake and so it is what it is, I guess," she said to Access Hollywood.

But a "cartoon protest" photo reminded me of Britney, and made me think, perhaps ironically, that her commitment to her young baby's safety might actually not have gone far enough yet. Has she mastered the five-on-a-bike-with-baby-on-the-tailpipe grip yet? A Pakistani family thoughtfully takes time out from protesting to demonstrate the technique so Britney can start practicing: 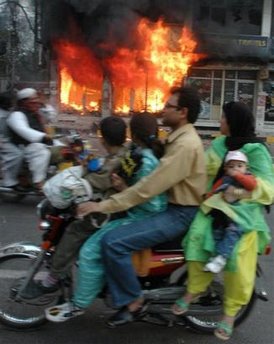 A Pakistani family rides past a burning shop, set on fire by angry mob during a protest rally against the publication of cartoons depicting Islamic prophet Muhammad, Tuesday, Feb. 14, 2006 in Lahore, Pakistan. Throwing stones and even wielding hand guns, rioters ran amok in two Pakistani cities on Tuesday, burning down a KFC and hurling stones through the windows of the Holiday Inn and Pizza Hut, as protests over Prophet Muhammad cartoons spiraled out of control. (AP Photo/K. M. Chaudhry)

Brief aside about the "cartoon protest rally" -- I can't help myself -- why are they attacking KFC? Has Kentucky come out in favor of mocking Mohammed? Did the Kentucky Chronicle republish the cartoons without notifying me?

And I don't see any cheerleaders, so can we stop calling these things protest "rallies" when we really mean violent rampages?