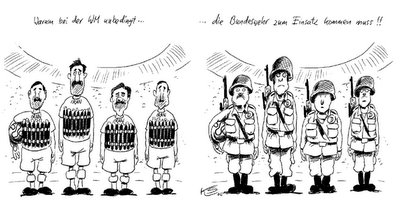 TEHRAN - The general secretary of the Iranian press association called Sunday for action over a football cartoon printed in a German newspaper showing the Iranian national team standing in a World Cup stadium with bomb belts strapped to their jerseys.

Manuchehr Sandi called the cartoon, which was printed in the Friday edition of Berlin's Tagesspiegel, a 'dirty joke' and in an interview with the ISNA news agency demanded the German Embassy in Tehran give an 'appropriate reaction' to it.

The Iranians are scandalized, and properly so, by the hideous implication of an Iranian affinity for suicide bombing. As if every Iranian publically answered their government's call for suicide bombers. Right! So far, it's only fifty thousand:

Tehran, Iran, Nov. 17 (2005) – Fifty thousand Iranians have signed up for “martyrdom-seeking operations” and 1,000 of them have already been organised into operational units, Mohammad-Ali Samadi, the spokesman for a government-orchestrated campaign to recruit suicide bombers told an Iranian news agency.

And how many of these civic-minded Iranians are actually on the soccer team? Clearly, this cartoon is grossly exaggerated and boorishly insulting, not to mention technically inaccurate.

Further, while I can't explain exactly how, I'm sure the cartoon is also a punishable affront to the Prophet. The idea of insinuating that decent, Allah-fearing Iranians want to strap explosives to their bodies, just because they volunteered to do so, well, it's a desecration of the peaceful precepts of the Prophet.

But the idea of Germans in military uniform? Now that's funny. I think even the Iranians could laugh at that part.