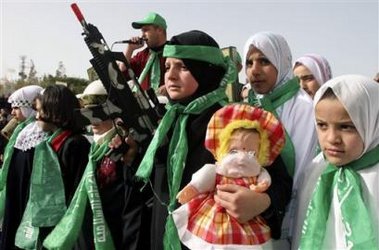 Palestinian girls wearing Hamas scarves and headbands, one holding a toy gun and a doll, others holding copies of Islam's holy book Quran, during a campaign for students' council elections at the Arab American university in the northern West Bank town of Jenin Monday, Feb. 27, 2006. The elections is scheduled for Tuesday. The European Union agreed Monday to provide euro120 million (US$143 million) in urgent aid for Palestinians before a government takes office led by Hamas _ a group the bloc considers a terrorist organization. (AP Photo/Mohammed Ballas)

Wow, Hamas has really turned into quite the politically astute little organization since their victory in recent parliamentary elections. They've learned that every campaign matters, and that there's nothing quite like a quality photo-op. Let's take a quick look at some of the fine details they've managed to pack into this one picture:
One is only left to wonder, in light of all the positives already mentioned, who screwed up and forgot to bring the My Little Princess Suicide Belts?