Boker tov, Boulder has come across an almost impossible-to-solve riddle:

World Girl Rants is mostly back after a bit of a hiatus, and has some very informative work definitions to share with us:

The Penske File
Definition: A notebook or file folder you carry around to make it look like you are on the way to a meeting, when really you are going to your friend's office to hang out.

Go take a look, maybe share some of your own. And be sure to encourage her not to do the hiatus-thing again.

Then there is this one via The House of Wheels as summarized by Jawa Report:

House of Wheels points out how this is just another example of stage-managed pseudo-news.

Scott explains a little bit of how juggling affects him and why he so looks forward to juggling conventions:

Also, I got really sore in a few weird places. I'm used to the fact that the bottoms of my feet always ache since I'm not used to being on my feet all day. The unusual pain I had this year was under my arms from all the rubbing as I juggled. Another annoying thing was that the skin on my fingertips got dry and cracked from moving through the air so much. And the cracks bled a lot when bumped by clubs. Oh, the bumps! I got lots of bangs with my new heavy one-piece clubs: on my fingers and bones in my hand, on the head and face, and on the toes. Ouch!

Israellycool is running a caption contest on a picture that looks like it could be a poster for the Sexual Harrassment Prevention Institute.

Trouble finding your keys? Apparently Daled Amos knows the trick to solving that problem, but as a public service he's not sharing the details of exactly how it works.

Regina Clare Jane has a post that will make you want to call your mother. I know I wish I could.

Soccer Dad follows the Saudi money trail all the way to the Palestinians and surprisingly, with a little help from the Elder, discovers the trail isn't so big as they'd have you believe. The bad news is there are other, bigger money trails.

3500 content-rich posts in 2 years! That can only be the bloggiversary of one unique Random Thinker.

Meryl Yourish has the story of eight ancient "new" species recently discovered in million-year-old caves not far from the town where I live. I was going to post on this, but Meryl covered it so well I can't bring myself to say anything except: read her version.

Ezzy described his sleep-deprivation habits and I flashed back to my younger college days. If only I'd had a blog back then, when I was able to survive on three hours a night. Instead, I just sat around with my friends eating 3am pizza, not doing homework and not studying for finals. Those were the days.

Crossing the Rubicon2 has the scoop, with a hat tip to the nation of Syria, on Israel's discovery of a time machine, just so we can embroil the world in more and bigger wars!

Wild Thing blogs about the back alley interview with a big wig Hamas enforcer who happens to be the official security chief of their new terrorist government. I was inspired to contribute just a little bit to the photo accompanying her post: 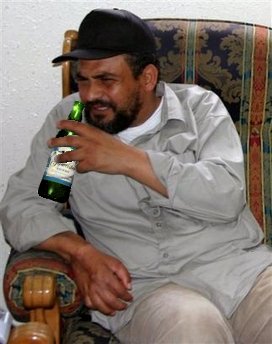 Isaac Schrodinger quotes part of an immensely sensible interview and adds his own usual good sense to boot.

Ok, that's all for tonight. Go make your Shavuot cheesecake.