Waiting for the Funeral Coverage

Four terrorists were killed near the border in Gaza. Haaretz has both the story and a very telling picture: 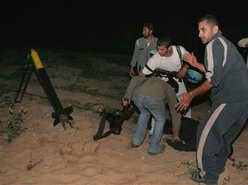 Gazans removing the body of a member of a Qassam crew killed early Tuesday by IDF troops as he prepared to fire a rocket into Israel. (AP)

I'll be watching the newswire for headlines of the funeral coverage story. When those stories come, please keep the picture above in the back of your mind, so you'll remember exactly what those "Gazans" were attempting to do when they were so rudely interrupted.

It wouldn't shock me at all later today to see headlines like "Israelis kill four in Gaza" or "Gazans mourn four killed in Israeli strike" -- and yes, I'm perfectly aware that I've reached a point of terminal cynicism. I now have more cynicism coursing through my veins than the combined total of all the lab rats that have ever died in cycnicism toxicity studies.

Yet I continue to blog. Science has no answer.

UPDATE: The Elder of Ziyon brings us the expected context-free coverage of the grieving relatives of the deceased would-be rocket launchers, and much more as well -- definitely worth your time.