MSN-Mainichi Daily News reports that Sumo has reached its limit for foreign wrestlers:

Foreign wrestlers hoping to enter Japan's ancient sport of sumo will have to wait in line.

Because of a rule that permits only one foreign wrestler per stable, there are currently no openings for foreigners in sumo.

Actually, for me this is a blessing in disguise as it will give me more time to practice the techniques, like throwing salt in your opponents eyes, and giving him a serious wedgie. But I'm pretty sure that with a little training, and of course some bulking up, I could have been pretty good.

And this despite the fact that I never took part in Intramural Sumo. Of course, others may have an unfair advantage, starting at a much earlier age than 41:

NAGOYA -- Parents put their babies to the test in a "baby-crying sumo" tournament here, as spectators gathered to see which baby would cry the fastest.

The tournament, in which babies faced each other, held up by participants playing the role of wrestlers, was staged in the head Matsuzakaya department store in Nagoya's Naka-ku.

Baby-crying sumo originated as a festival at Ikiko Shrine in Kanuma, Tochigi Prefecture. The event, featuring both Shinto priests and sumo referees, has become a regular occurrence around this time of year, and on Sunday a total of about 100 babies and toddlers aged between 3 months and 2 years took part.

Some babies cried as soon as they were held by the wrestlers, while others started swinging their hands.

As the results were released, referees appeared to focus on the individuality of the toddlers rather than on which baby cried first, and all bouts were declared ties. (Mainichi) 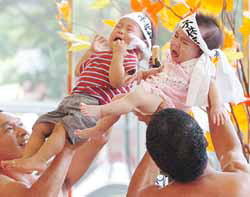 I'm pretty sure I could take the one on the left. I don't cry much, but I whine easily.