MSNBC has what I'm pretty sure is a tongue-in-cheek article by a teacher comparing her methods with those of the infamous Professor Snape:

This is not to say that Snape doesn't care about his students' education, in a sarcastic, uncheerful, I-hate-you fashion. He'll even save a life here and there, as long as you don't try to hug him or talk to him or walk within a five-mile radius of him afterwards.

I say tongue-in-cheek because while she writes admiringly of his teaching style and its results, she seems to do so to point out how it wouldn't work in the real world.

My students receive a happy, free-of-charge smile face sticker on exams scoring 95 percent or above, whereas if you scored an A with Snape, you might be rewarded with merely a medium-sized withering glare rather than the usual Super Sized one. I have much to learn from his methods, as I doubt that Snape is often besieged with students screeching at him that of course they should have gotten an A on this essay, as they have gotten As on every single possible evaluation since gaining the ability to breathe independently.

Of course I've never had the experience of teaching in a real school, but I can say that I have personally tried the Professor Snape method of education and found that it works quite well -- on my own children.

In order to get my 7 and 8 year old daughters, both big Harry Potter fans, to work on their math and reading and general classroom skills a little, I've started the Hogwart's School of Math-Magic which meets most evenings at Hogwart's castle (Tamar's room). In choosing their Professor, I first thought I would go with the lovable Hagrid who would be kind and encouraging at all times. But for some reason, a wild hunch I guess, I went with Severus Snape instead. 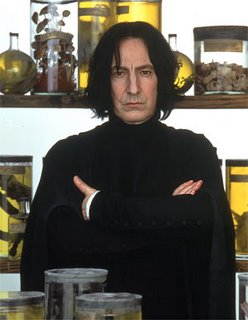 So while trying to teach them some simple math skills, and how to tell time or read a recipe (a skill disguised as fake potion recipes), I do my best to emulate precisely the qualities mentioned in the article. Oddly enough, the kids really love it, even though I'm going out of my way not to tell them what smart and clever girls they are, and refrain entirely from praising the wonderful job they're doing.

When they answer a math question correctly on the white board I bought for the "classroom," I snarl in dissappointment that a Mudblood Gryffindor could somehow answer such a difficult question correctly and that it must be a matter of blind luck, or perhaps that they copied from Malfoy's paper. They love it. I also give out "points for Gryffindor" (smily face stickers), but only reluctantly and with a lot of grumbling.

I'm sure a big part of it is just the chance to pretend they are at Hogwarts, and another big piece is probably that they know I really love them and manage to see thorugh the Professorial snarling and grumbling, recognize the encouragement that is really hidden behind it. Nevertheless, at the risk of overreaching in my analysis, there might be another dynamic here as well.

It reminds me a little of a teacher I had in the 4th grade. When I found out at the end of the 3rd grade that I was to be in her class the following year, my classmates all shook their heads sympathetically because she had a reputation as the sourest pickle in the barrel. But once in the class, at least for me, it worked out really well. She demanded a lot, and gave out only honest praise as well as honest criticism and discipline, but it brought out the best in quite a few of us. I'm sure it doesn't work for everybody, but sometimes in our rush to always compliment and encourage no matter what, we take away the chance for kids to feel their own sense of accomplishment, knowing they must really have done something right to get a certain reaction. Obviously, kids still do need love and encouragement and compliments, not a just a lifetime supply of disdain and discouragement. But maybe I can suggest we need moderation in all things, except of course for moderation.

Kids do need praise, but apparently a snarl and a curt dismissal from Professor Snape is high praise indeed.

Now I have to start planning their detention for this afternoon, and practicing my smirk.