I chanced upon the Reuters coverage of Nir Kahana's funeral at Yahoo. I was struck by the sense that the slightest something was just...missing...from their coverage of the event: 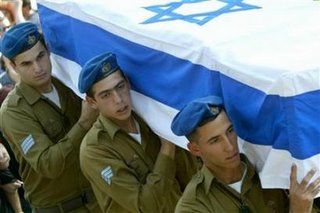 Israeli soldiers carry the coffin of Israeli soldier Nir Kahana during his funeral at the cemetery in Tiveon in northern Israel, December 9, 2005. (Gil Cohen Magen/Reuters)

Just to check, I looked for the AP version of the same funeral, and did find some niggling differences: 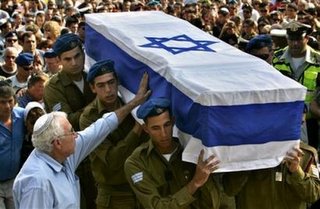 A mourner reaches to touch the casket as soldiers carry the coffin of Israeli soldier Nir Kahana during his funeral at the cemetery in Tivon, northern Israel Friday, Dec. 9, 2005. Kahana was stabbed and killed by a Palestinian at the Kalandia checkpoint near the West Bank town of Ramallah Thursday evening.(AP Photo/Kevin Frayer)

AP did apparently notice that Nir hadn't died from a tragic shaving accident, nor had he died from a fit of apoplexy yelling at poor Palestinian old ladies while standing guard at his checkpoint. He was stabbed to death.

It isn't really all that hard to explain how someone died. Newswires do it all the time: "killed by Israeli air strike" or "shot and killed by an Israeli naval boat," just for instance.

I suppose I should just be happy AP bothers to put any context on an Israeli soldier's death, and chalk the rest of it up to innocent Reuters oversights.

But I actually can manage to find a bone to pick even with AP's coverage. Like Reuters, they show images of Nir's mourning comrades comforting each other: 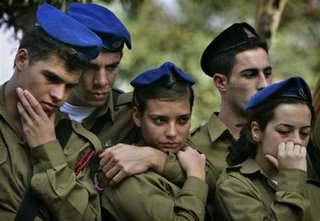 An Israeli funeral features the tears of soldiers, comrades in arms and oppression. But is that a big deal?

Only when you consider what the typical Palestinian funeral coverage looks like: 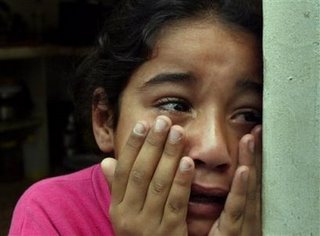 Asmaa Qaddas, the niece of Al-Aqsa Martyr's brigades militant Iyad Qaddas, 21, reacts during his funeral procession in the Jebaliya refugee camp in the northern Gaza Strip Friday Dec. 9, 2005. Qaddas and another Al-Aqsa militant were killed during an Israeli strike Thursday. (AP Photo/Hatem Moussa) 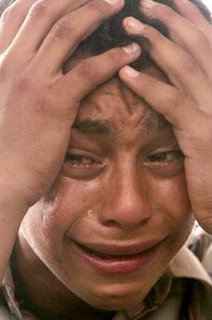 A Palestinian relative of Mahmud el-Arqan, 29, a leading member of the Popular Resistance Committees, mourns during his funeral at the Rafah refugee camp southern Gaza Strip December 8,2005. An Israeli air strike killed Mahmud el-Arqan a senior militant in the Gaza Strip on Wednesday and wounded 10 other people, three of them children, Palestinian medics said. REUTERS/Mohammed Salem

Even suicide bombers who murder innocent Israelis have grieving sisters: The sister of Palestinian suicide bomber 21-year-old Lotfi Amine Abu Saada is comforted by her mother at her home after hearing the news that her brother was the suicide bomber who killed himself and five other civilians. Five Israelis were killed and dozens wounded when a suicide bomber blew himself up at the entrance to a shopping mall in the northern coastal town of Netanya.(AFP/Jaafar Ashtiyeh)

Murdered Israelis have only their grieving militaristic cohorts.

One last little point, since I can't seem to stop myself today. If you look at my previous post, about the nasty barbed wire at the Kalandia checkpoint as photographed by Reuters, do you think there's any chance that the barbed wire lying on the ground is there because a Palestinian had just murdered someone at that very location? Doubtful, since such a possibility would obviously have been mentioned somewhere in one of the news-photo captions.

Israeli barbed wire is, by nature, gratuitous and cruel.

As is my Reuters coverage.