Khaled Meshaal, or a Cruel Joke? 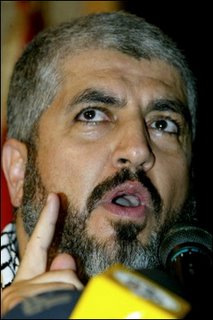 The head of the Islamist group Hamas's political branch, Khaled Meshaal, says the group will not renew its fragile truce with Israel when it expires at the end of the year. Syriana star George Clooney then laughed and cried "Gotcha" as he celebrated yet another of his famous practical jokes. He confessed he had taken the role in the controversial film, putting on 35 pounds in the process, solely as preparation for this, his greatest prank ever. Satisfied with the mystified looks on gathered journalists' faces, Mr. Clooney immediately headed for the refreshment table to begin preparing for his next, even larger role.(AFP/Louai Beshara)