Queers for Palestine, but not vice versa

Sondrak at Knowledge is Power has a very queer photograph: 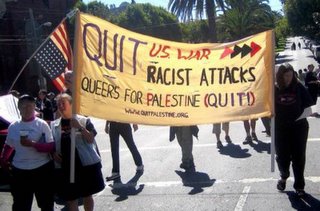 As Sondra points out, these people seem blissfully unaware of exactly how much the men of Hamas appreciate their support, or how their supportive pat on the symbolic fanny is received. Sure, queers may be for Palestinian, but is Palestine for queers?

I'm not sure they would be greeted so well if they tried to march this festive little parade down the streets of Ramallah on a pilgrimage to Arafat's grave at the Muqata -- how they would have been received were Arafat still alive is another matter.

I don't think the Palestinians would quite know what to do with them. Well, other than the obvious. They can't just publicly stone them, since a gay rights march through Ramallah would probably attract more Reuters photographers than the annual Hamas "Death to the Jews" telethon.

This would leave the Palestinian leadership in quite a bind, unsure of precisely how to make use of them. They can't even let them volunteer to be suicide bombers, what with the virgin problems and all. It would be quite difficult for Hamas and Islamic Jihad attack planners to keep a precise 72:1 ratio between straight and gay male suicide attacks.

So for now, the queer folks over at freepalestine.org will have to settle for supporting Palestine, but from a distance. Of course they could have come to last year's World Gay Pride Day festivities in Jerusalem, but that might have inadvertently given the appearance of condoning the legitimacy of the rights-abusing totalitarian regime in Israel. No, better to stay home and support the freedom loving peoples of Palestine, who probably wouldn't even want these homosexual supporters to blow themselves up on their behalf.

But they shouldn't let that rein in their parade.