So They Cover Every Funeral Now

This is really wierd. Do the international "Middle East" news photographers cover EVERY Palestinian funeral now? There's always the chance of snapping off a really classic pic of a weeping widow or crying kid, I know. But this is a little ridiculous: 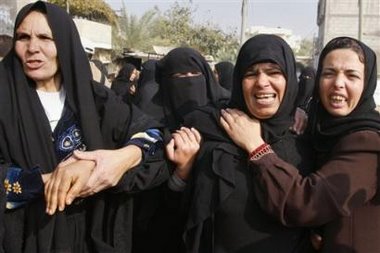 Palestinian women weep as they hold each other during the funeral of Mohammed Fara in Khan Younis, southern Gaza Strip, Tuesday, Dec. 13, 2005. Fara, 45, who died in the Gaza Strip on Tuesday was killed when a metal fuel tank he was drilling through accidently exploded, a Palestinian investigator said.(AP Photo/Hatem Moussa)

Maybe the funeral should be covered for the Darwin Awards, but posting it up in the middle of all the "Why-We-Hate-Israel" fodder kind of boggles the mind. I guess you could blame Israel for this on the grounds his hand wouldn't have been shaking while drilling if we'd allowed the Palestinians to import the caffeine-free Coke.

Seriously though, there is clearly a reason why AP photographers would post this photo as if it were just another in the daily parade of Israeli "atrocities." It's because they were hanging out with the Reuters photographers: 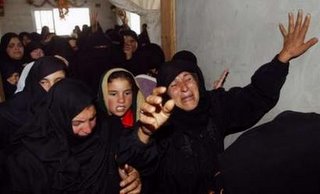 Palestinian relatives of Mohammad Al-Qara, 45, who was killed by Israeli troops on Tuesday, mourn during his funeral in Abassan village, southern Gaza Strip December 13, 2005. Israeli troops firing into the Gaza Strip killed a Palestinian man on Tuesday near the boundary where militants and soldiers have exchanged fire in recent days, Palestinian witnesses and medics said. REUTERS/Ibraheem Abu Mustafa

You see the Reuters guy heard from a friend of a friend that the Israelis did it. Heck, the Israelis kill practically every Palestinian that dies, so is it really that implausible? I don't think a Palestinian has died of natural causes since before "Ariel Sharon's fateful walk." Of course it is a little odd during the intifada how many 90 year olds were shot in their hospital gowns right outside their nursing home, but who can explain Israeli brutality.

So there are these rolls and rolls of funeral film that can't just sit in the news service offices. They must be posted. If it later turns out that maybe the Israelis didn't kill this particular guy, as AP later discovered, so be it. At least AP bothered captioning their picture with the true cause of death. Reuters, on the other hand... well, they've got their reputation to think of.

But wait, some might say. AbbaGav, you've jumped the gun here. On careful inspection, Reuters named their shahid Mohammad Al-Qara, 45, while the AP toe-tagged him with the name Mohammed Fara, 45. Could it be I've got the wrong guy? After all, one guy spells Mohammed with an -ed and the other with an -ad, not to mention the Al-Qara/Fara thing. Perhaps it's not evidence of any special gullibility or bias, perhaps it truly is two separate funerals.

Sorry to disappoint the Reuters cheering section, but in this case, I'm pretty sure they are the same guy. If you look at both wire services' pictures of the "two funerals," you'll see they both were attended, coincidentally, by the very same super special celebrity guest mourner: 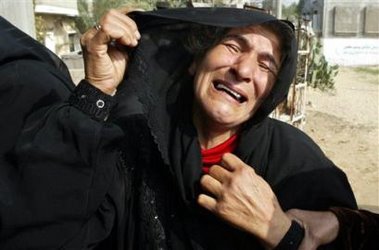 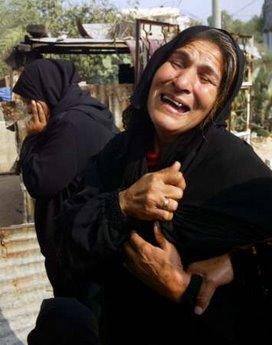 Hey! Jean Luc! It's Captain Picard of the starship Enterprise, wailing like a banshee. I always knew he had more dramatic range than he was letting on. 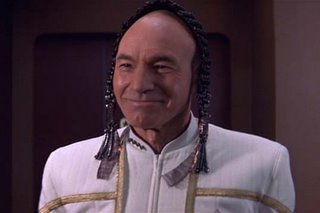 So remember, just because Reuters and their Palestinian friends tell you the Israelis killed someone doesn't make it so.