It looks as if the Songun State has been issuing it's own Juche version of U.S. money. The United States, whiny as ever, is now complaining that these fake hundred dollar bills might technically be considered counterfeit:

Using equipment from Japan, paper from Hong Kong and ink from France, a team of experts was ordered to make fake U.S. $100 bills, said a former North Korean chemist who said his job was to draw the design.

'The main motive was to make money, but the secondary motive was inspired by anti-Americanism,' said the chemist, now 56 and living in South Korea.

Before long, sheets with 30 bills each were rolling off the printing presses. By 1989, millions of dollars' worth of high-quality fakes were showing up around the world. U.S. investigators dubbed them 'supernotes' because they were virtually indistinguishable from American currency. The flow of forged bills has continued ever since, U.S. officials say, despite a redesign intended to make the cash harder to replicate.

For 15 years, U.S. officials suspected that the North Korean leadership was behind the counterfeiting, but they revealed almost nothing about their investigations into the bogus bills or their efforts to stop them. Now, however, federal authorities are pursuing at least four criminal cases and one civil enforcement action involving supernotes.

Wow, it took them fifteen years to catch them! That must be some really good counterfeitting. I wonder what finally got them caught. Was it the holographic images? Or the embedded metallic threads? Or some other recent high-tech anti-counterfeit innovation? 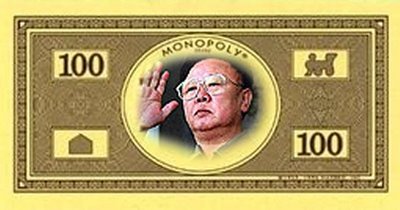 You might want to check your wallet, you know, just to be sure. If you do end up with one of the North Korean notes, don't worry too much. I'm sure they are backed by the full faith and credit of Kim Jong Il. All of it.