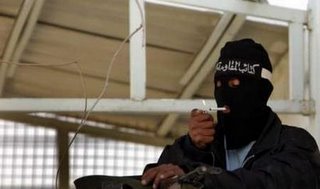 click for original photo and caption at Yahoo. REUTERS/Suhaib Salem

Kudos to Reuters, publishing the earliest photographs on record of initial training sessions for a new brand of terrorist. While there is no telling as of yet how long it will take to deploy the smoking shahids, or whether they will be entitled to the full complement of virgins upon completion of their missions, there seems little doubt that a new phase of Jihad may be just around the corner.

This new breed will seek to kill as many Israelis as possible with the indiscriminate wafting of second hand smoke amidst innocent civilian populations. Most experts in terrorism and international policy, like Christy Turlington and one or another of the Baldwin boys, have come out solidly in favor of the new strategy's effectiveness, citing the incredible lethality of second hand smoke. Actress Sharon Stone, however, sounded a cautionary note. She agreed that second hand smoke kills, "but," she added, "not reliably."

While the use of second hand smoke in combat is technically against the Geneva Convention, or at least contrary to the spirit of several municipal zoning ordinances in various California communities, this new tactic is unlikely to attract UN censure say a number of diplomatic sources. European governments are already warning Israel against disproportionate response, if and when these new attacks begin, making it clear that retaliatory cigar or pipe smoke would be considered a form of collective punishment that could further isolate the Jewish state internationally.