A Great Parody of Police and Protests

Ok, we'll make this one a quiz to see how well you know your blog-satirists. I'm going to give you a silly piece of exaggeration about the cartoon protests and you see if you can tell me who you think wrote it. Was it:

a) SnappleFace
b) the Onion
c) Point Five or
d) Iowahawk?

Before I give you the sample piece, screw your thinking cap on tight, and maybe take a peek at each of the sites to get a feel for each one's style before you take your guess.

As fanatics - some dressed as suicide bombers - staged more protests yesterday, David Davis, the shadow home secretary, said the police should take action against what were clearly offences of incitement to murder. 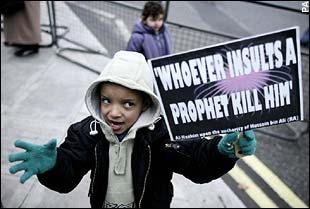 At the height of the protests on Friday demonstrators chanted slogans threatening more London bombings, praising the "magnificent" 9/11 hijackers and waving placards saying "Massacre those who insult Islam", "Europe you will pay" and "Europe you'll come crawling when Mujahideen come roaring".

Mr Davis said last night: "Clearly some of these placards are incitement to violence and, indeed, incitement to murder - an extremely serious offence which the police must deal with and deal with quickly. [...]

Yesterday, more than 1,000 demonstrators staged a second protest outside the embassy. The only arrests made were of two men found carrying cartoons of Mohammed. Police said they had been detained "to prevent a breach of the peace".

Did you get it? Stylistically so familiar, yet so seriously absurd, the idea of all those "protesters" calling for the death of those they disagree with, and the only arrests are of two of the intended victims for having the gall to not simply cower in their homes waiting for the mujahedeen's roar to reach them.

I'd still be laughing if the answer weren't e) None of the above.

This ridiculous parody comes not from Scott Ott's fevered imagination, but from the real-life pages of Britain's Telegraph (with an assist to Yael at Step by Step for digging it up).

But please, don't worry, all is well. Lest you have a minor anxiety attack that the police are ignoring threats of murder, let me put your mind at ease:

The Metropolitan Police said: 'Arrests if necessary will be made at the most appropriate time. The Met has several different means of collecting the necessary evidence should it be required post-event. All complaints made to police will be passed to the Public Order Crime Unit for investigation.'

So as long as they're not saying they plan to wait for the actual murders before considering any action, then there's nothing to worry about. Is there?

Hmm. Now I'm starting to worry about those two arrested protesters. You don't think the appeasement would go so far as to...

UPDATE: If anyone has the cure for maladies like these, the kind that need more than 2 aspirins, it's got to be Dr. Sanity. Thanks for taking the case, Doc.