AP brings us a photo of a little known Hamas innovation in the democratic process, the "Hamas Primary": 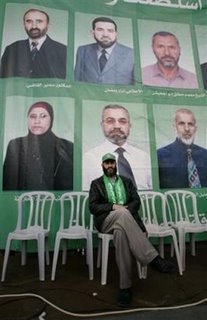 Hamas candidate Nayef Rajoub sits under a banner showing posters of other candidates during a campaign rally by the militant group in the southern West Bank town of Idna, Wednesday Jan. 11, 2006. In Hebron, the Palestinian legislative elections are brother against brother. For Fatah: one of the late Yasser Arafat's most swaggering proteges, Jabril Rajoub. On the Hamas slate: his younger brother Nayef, a longtime academic and beekeeper who has picked up the Hamas lingo of Islamic values and the need to uproot the corruption and cronyism of Arafat's era. (AP Photo/Lefteris Pitarakis)

Many political parties throughout the democratic world select their election slate from a larger field of potential candidates in a vote that is usually called the primary. Hamas, as an aspiring democratic yet Islamic party, must nevertheless change this process just a bit, in order to avoid the stigma of appearing to ape the methods of the infidel West. So while they have a primary, it is not based on votes, but on an inversion of the children's party game, Musical Chairs. They assemble the candidates at a rally on the presumption of giving campaign speeches. Then they pipe in the sound of Israeli helicopters over the loudspeakers. Last one seated is the winner.

At least that's how I think it works.