Hamas key chains? Now that must be an exotic little chotchka. One can't help but wonder what amazing sales pitch would offer hamas key chains as that little extra something that seals the deal. And what use would it likely be put to?
Alas, it's nothing quite so exotic or threatening. 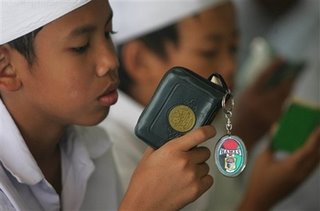 A students reads a copy of holy book of Koran as a Hamas keychain is hanging on its cover during a prayer at Al Mukmin Islamic school in Solo, Central Java, Indonesia, Thursday June 15, 2006. Parents registered their children at the hard-line Islamic boarding school founded by freed militant cleric Abu Bakar Bashir shared none of the concerns of Western nations over his alleged terrorist links nor that at least one international expert has dubbed it an 'Ivy League' for Indonesian militants since it has produced so many members of the al-Qaida-linked group Jemaah Islamiyah. (AP Photo/Dita Alangkara)

Nothing but a bookmark for the instruction manual at one of the finest Islamic institutions of higher learning for young boys, the "Ivy League" for Indonesian militants. Completely harmless.