Some Beards Are Funny, Others Are Not

As I mentioned yesterday I've found that Hizballah leader Hassan Nasrallah is simply not in Hamas' league because of his serious shortcomings as a target for humor, mocking and ridicule. So today I'm going to follow up on what I speculated is the root cause for Nasrallah's humor deficiency -- his big but boring beard:

I've come to the conclusion Nasrallah needs to dye his beard red, or maybe purple so he'll have his own trademark.

I draw this conclusion by comparing Nasrallah's beard (not funny) to that Hamas guy with the orange beard (hilarious): Sure, go ahead and laugh at my theory. At least then I could truthfully claim I've drawn a laugh at the expense of this murderous dufus. But seriously, who are you gonna laugh at, the dweeb with the big Harry Carey glasses, or the clown who thinks a bright orange beard would go splendidly with his party's ever-present green hat?

Clearly Nasrallah has a "funny problem." And I think you'd have to agree that probably the second funniest thing that could possibly happen to this Iranian puppet boy would be a little dye job under his chin -- second only to a missile up his aspirations. So I'm going to personally take up that humorous challenge -- the beard one that is; unfortunately I don't own any missiles -- and give Nasrallah's beard its own signature purple dye job: Hmmm. I don't know. I guess that's a little funnier, but somehow I was hoping for more. Frankly, I don't think either of these guys, Nasrallah or Orange Beard, is really fully leveraging his beard's potential to further the cause, propagate the message, and look incredibly ridiculous at the same time.

Although, I give Orange Beard credit for at least trying.

He is, after all, on the right track. It's all in the beard -- and I'm not just talking about sand lice and the remains of yesterday's felafel. Apparently in the Arab world, the saltiest insult one diplomat can hurl at another is "Curse be upon your mustache." So you can only imagine how much more importance this facial-hair fixation will place on one's beard.

But do I see any attempt to utilize these bushy beards in service of the cause? No, not really. Beyond a little comic, look-at-me attention-grabbing dye job by the Hamas guy, they are leaving those vast, hairy billboards empty. It's a disgrace really.

And yet we're supposed to believe these guys are the masters of media manipulation. Powerful propaganda propagators. Bigshot bloody brand builders. Puhhlease! Sure they can manipulate a few naive, eager-to-please global news organizations. But how hard can it be to dupe the various flunkies, stringers, editors, reporters, journalists, anchors and analysts into pumping out Hamas' and Hizballah's propaganda disguised as news stories and photographs every day? Yeah, not that hard.

Meanwhile, they've barely even touched one of their greatest promotional assets: their beards.

Of course, that Hamas guy's orange beard is great for identification purposes, helping establish his personal brand, but it doesn't actually SAY anything -- heck, I can't even remember the guy's name half the time. If old Orange Beard REALLY wanted to leverage his beard for the cause, he would use it to convey one of the party's pre-approved messages.

Obviously, he could have picked a color and beard detailing that was more helpful to the overall goals of promoting Hamas as a party, and not just marketing his own face: 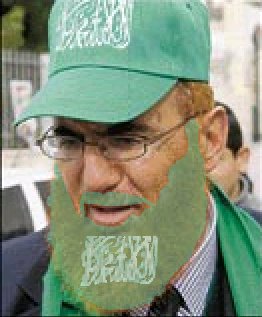 Or, better still, since his "political party" is flat broke he could have tried to convert his beard into a lucrative revenue stream. Has he ever considered trying to raise a little cash to help pay for his comrades' ammo and explosives? 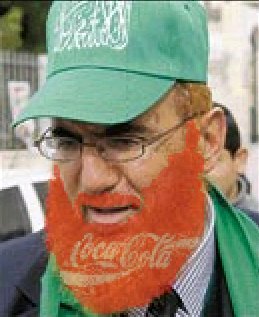 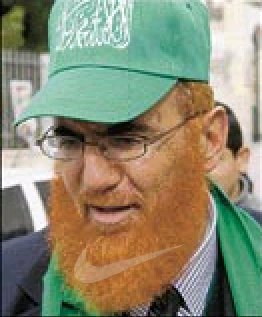 Note, these pictures are only artists' conceptions and do not imply that any corporations are actually soliciting advertising space on any Hamas politician's face -- that would be immoral. Or at least it would be immoral after they first ran a spreadsheet looking at the expected market benefit of all that free advertising on Al-Jazeera and the BBC every time a glowing portrait of Hamas is run, and compared it to market losses in any parts of the world that still oppose suicide bombings. Then it would be very immoral. I hope.

But what about Nasrallah? His party doesn't share Orange Beard's revenue challenges; they've been Iran's well-compensated concubine for quite a few years now, and don't lack for money or weapons. But Nasrallah knows that his war to wipe out the Jews won't be won with 10,000 missiles alone. It's about getting the message out: "Help me kill these Jews." So perhaps he'd consider using his beard as a public service announcement: You might be thinking that the beard is a relatively impermanent medium for a message of such importance, and that perhaps Nasrallah should instead choose something a bit more lasting. Wouldn't it be better to use tape and tanning lotion to mark the message on his own body, or maybe even get a tattoo? Perhaps. Regardless, both of those methods are clearly impractical. Can you really envision Nasrallah tanning at the beach, exposing a vast expanse of gut flesh on which to ensribe the message? Without throwing up, I mean?

And the tattoo? Well clearly, once we rule out the beach option, Nasrallah doesn't usually expose a lot of skin on which to display his tattoo. About the only possible place would be on his forehead -- which might be nice given how much TV time his forehead gets. But Nasrallah's forehead already has a tattoo and no room for another. It's just that you can't usually see it because it only shows up in certain infrared frequencies known only to the IDF. So I believe I have proved my point. Nasrallah needs to either dye his beard right away or take a missile up his aspirations; there is no other alternative. Quick, somebody hide the beard dye.

(And yes, I have a beard. But mine is not funny. Not very funny.)