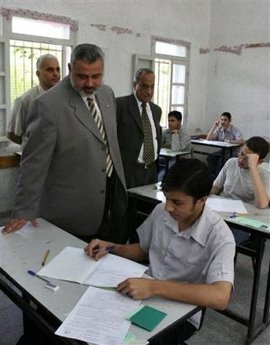 The Prime Minister's visit during exams week was apparently part of his new initiative to raise exam scores throughout the Gaza Strip up to 10% this year by personally proof-reading as many exam booklets as possible to prevent students from turning in answers with careless errors. A few helpful tips overheard during the exam tour: